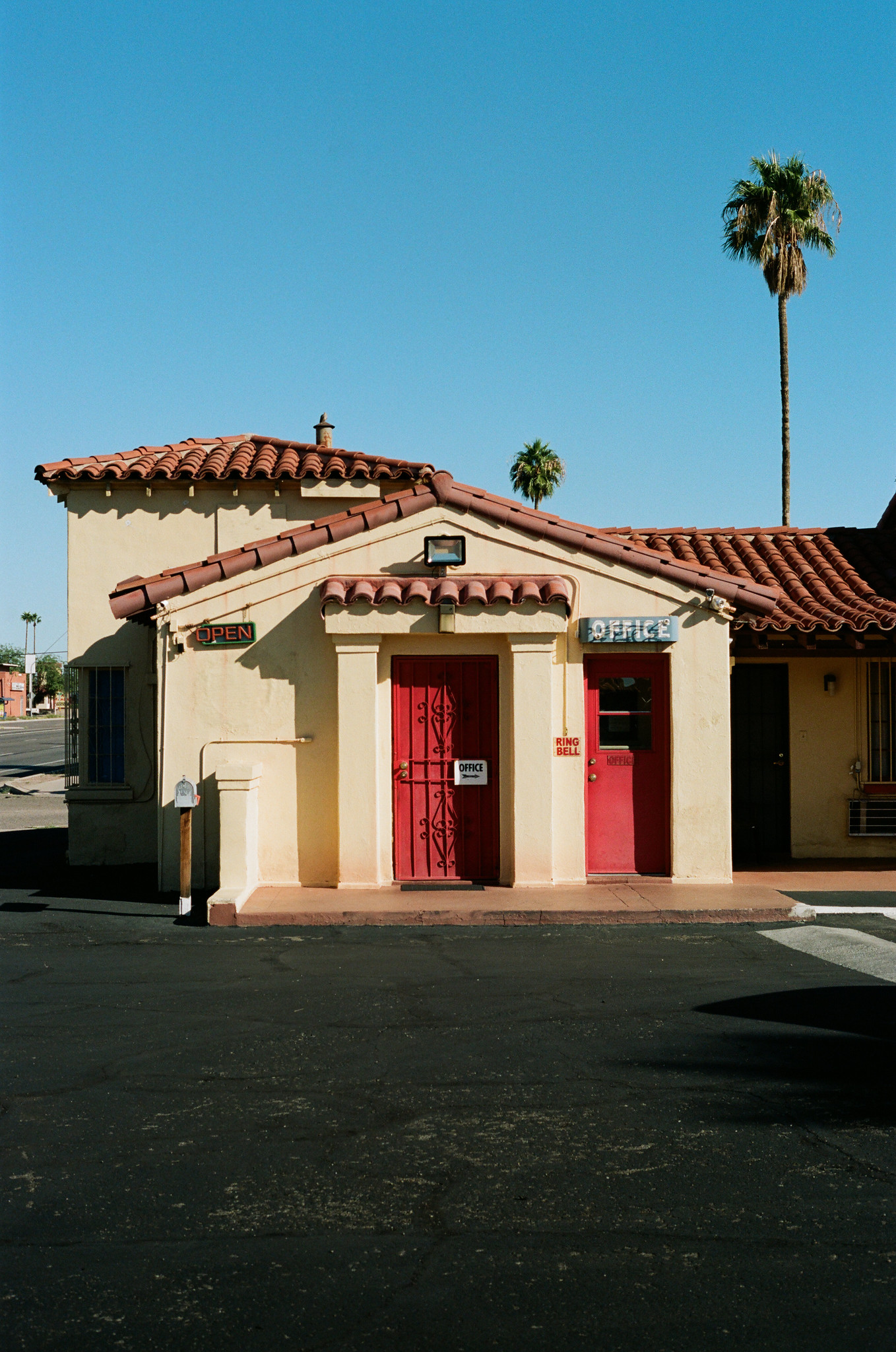 In 2018, I changed jobs, and I was fortunate to be able to take some time off between leaving my old job and starting my new one. During this time, I was able to travel to a few different parts of the country to visit friends, explore new places, and take a lot of pictures.

In October, I took a road trip across the country. I flew to San Diego, picked up a rental car, and started heading back home to Cincinnati. The route took me through a few places I had been before, but mostly places that were completely new to me. I didn’t have a strict itinerary, but I did have a long list of places I wanted to photograph along the way.

This was a long trip, so I’ve selected a handful of my favorites from along the way to share in this gallery. The majority of the photos were taken with my Canon AE-1 with 50mm and 35mm lenses and my Hasselblad Xpan II with a 45mm lens. I also brought my Panasonic G9 for situations when a digital camera would be better, but only ended up using it a handful of times.

Due to the hassles of flying with film, I typically try to buy film at my destination. So when I landed in San Diego, I headed to George’s Camera and picked up a few boxes of Kodak film — Portra 160, Portra 400, and Ektar 100.

I briefly stopped to photograph the San Diego jetty cats (one of my few digital shots), but after that, I began my journey and started heading east.

My next destination was Palm Springs, but on my way there, I’d travel through several small towns in California’s Imperial Valley. I was especially interested to see the Salton Sea and the towns that surround it, after learning the history of the area from the podcast 99% Invisible a few years earlier.

While many of these towns had areas that were struggling and run-down, they also had neighborhoods that were thriving and clearly had a strong sense of community.

Palm Springs is a fun city to visit and photograph. The midcentury modern architecture combined with the backdrop of mountains, palm trees, and cacti make it an instantly recognizable location.

After staying the night in Palm Springs, I left for Tucson, passing through a few towns in the Mojave Desert along the way.

The landscape of the Sonoran Desert is incredible to see in person, and pictures don’t do it justice.

The city of Tucson has an interesting mix of different cultures and a laid-back attitude, and was a fun place to spend a few nights.

I was drawn to the old motels along the main arterials, many of which were still operating. The city also made an effort to preserve some of the old signs from motels that had been demolished, which was nice to see.

As I was leaving Tucson, I happened to pass a classic car show in the parking lot of a 1960s bowling ally. I’m glad I stopped to take a few pictures, because Golden Pin Lanes permanently closed just a few months later. The building will be converted to office space and likely stripped of its unique character.

I headed north towards Phoenix, a city that’s just two hours away from Tucson but has a completely different feel. I stopped at South Mountain Park, hoping to get a shot of the Phoenix skyline, but cloudy skies made that impossible. Fortunately, I did come across this cluster of television and radio antennae on top of one of the mountain peaks, which was begging to be photographed with the Xpan.

Leaving Phoenix, I drove north through the beautiful scenery of Sedona and Oak Creek Canyon.

I finally arrived in Flagstaff, Arizona, a small city with an historic downtown, a nice amount of activity and vibrancy due to the presence of Northern Arizona University, and some interesting older motels and diners due to its location on Route 66.

After leaving Flagstaff, I headed west towards Albuquerque. The next stretch of my trip roughly followed Route 66, which provided many more opportunities to photograph motels, diners, ghost towns, and other roadside attractions.

Holbrook, Arizona was filled with so many interesting things to photograph, but the highlight was Wigwam Village #6, one of three remaining wigwam motels in the United States. (I had previously photographed the location in Cave City, Kentucky.)

Near Houck, Arizona, I stopped to photograph the abandoned and deteriorating Fort Courage Trading Post. A nearby billboard advertised the trading post and the Kodak film that was once sold there.

I arrived in Albuquerque, where I would stay for a few days. Strangely, I didn’t seem to take many photos during my time there. I think I was so busy taking in the city with my own eyes that I didn’t stop to photograph it very much. In any event, Albuquerque is high on my list of places where I want to return, and I’ll take more pictures next time.

I happened to be in town during the Albuquerque International Balloon Fiesta, the largest hot air balloon festival in the world. On my way out of town, I stopped to photograph the “Mass Ascension” event.

After Albuquerque, I took a detour from Route 66 to head north towards Santa Fe and Taos. Between the Rio Grande Gorge and the Sangre de Cristo Mountains, this was perhaps the most beautiful natural area I’ve ever visited, with the possible exception of Yosemite.

After the detour, I was back to Route 66. I headed east and stopped to photograph more Americana in Santa Rosa, New Mexico.

I was rushing to try to make it to Tucumcari, New Mexico—one of the most unique stops on Route 66—before the sun went down. Fortunately, I made it into town during magic hour and shot nearly half a roll of film there.

Unfortunately, the photo lab made a serious error while processing my film. The equipment that pulls the film out of the canister malfunctioned, and my roll of film was sliced in the middle rather than at the end. So, only the first half of the roll was scanned and returned to me. By the time I received my negatives and noticed the mistake, the second half of the roll was long gone. I actually wasn’t too upset—this was the first time that the lab had ever made a serious mistake with my film, and they offered to refund my entire order (which included most of the film I shot on this trip) and give me free vouchers for future processing.

I encountered some unexpectedly cold and extremely windy weather once I reached Texas, so I kept driving with very few stops until reaching Oklahoma City. Beyond that point, I diverged from Route 66 for good, heading northeast through Tulsa and stopping in various small towns.

A major highlight from this stretch was Waylan’s Ku-Ku in Miami, Oklahoma, the last surviving restaurant from a fast food chain that once had once had nearly 200 locations.

My next destination was Kansas City. I had been curious to see the great things they are doing with urban development and public transportation, which are unusual for a mid-sized American city. My favorite part of town was Crossroads, which seemed to be in the early stages of transforming into a trendy neighborhood.

It was also fun to visit the West Bottoms warehouse district. Many of the old warehouses were filled with interesting businesses like antique stores and, at that time of year, haunted houses.

During my stay in KC, I also took a side trip to visit some photo ops I found in eastern Kansas, including an abandoned mall and movie theater in Topeka.

After leaving Kansas City, I was on the home stretch. I made a final stop in St. Louis before returning home to Cincinnati. I stopped to photograph the iconic Gateway Arch from the recently renovated park space below. This somewhat unplanned, handheld snapshot ended up being one of my favorites from the trip.